There are wasps that lay eggs on a host insect, such as a caterpillar, and once their eggs are hatched they eat the host.  These wasps are an example of insect parasitoids. They rely mainly on chemical substances for communication to locate and recognize both their mates and their hosts.

Phases of this project included: 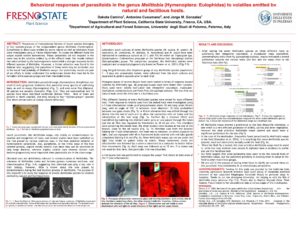 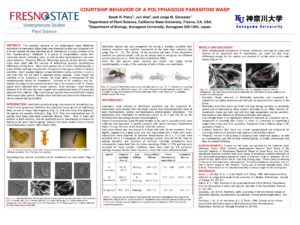 “We are sort of building an evolutionary tree of the Melittobia species based on our findings in chemical communications and the hosts used by the parasitoids,” said Dr. Gonzalez.

Knowledge about the nature of the relationships of the host selection is beneficial because it can provide the key to understanding the species relationships where the shapes and features are currently unknown.

There is a clear influence by the host and there is chemical communication among the wasps (both sexes). A preliminary draft has been in the works and collaborators from other Universities in Holland and Japan are working on the meaning of that communication.

This project was funded by ARI and a full report can be found at:

How Shade & Moisture Affect Weeds and the Development of Alternate Herbicides
November 23, 2016